Is your pension safe? It may depend on what happens to your company

Is your pension safe? It may depend on what happens to your company

You diligently make contributions to your company pension plan with the assumption you’ll get what you’re entitled to when you part with your employer.

But that may not always be the case — depending on what type of plan you have and what happens to your company.

Currently, workers at both Sears Canada and Northstar Aerospace in Milton, Ont., are facing deep concerns about their pension prospects because of the problems plaguing their employers.

“This is not fair for us,” says Naresh Ajmani, who retired from Northstar in 2015 after working for the manufacturer for 22 years, producing helicopter parts.

Ajmani recently learned from his union, Unifor, that because the Milton plant will soon be shut down due to lost business, his pension payments will likely be cut back.

“They have broken their promises,” says Ajmani, who joined more than 100 Unifor members Thursday to stage a protest at the plant. “I have set up my retirement. I’m not getting what I’m supposed to get.”

Unifor claims that because the plant is shutting down in September, there will be an estimated $6-million shortfall in the employee pension plan, which Northstar is refusing to top up. As a result, the union says the 250 laid-off workers and retirees will face a potential 24 per cent reduction in their pension payments.

“To the workers that are going to lose a couple hundred dollars a month, it’s significant. So someone’s going to have to fix this,” says Unifor national president Jerry Dias.

He also took part in the protest, which included blockading the plant’s doors, preventing it from operating that day. “We had to take some dramatic action in order to get their attention.” 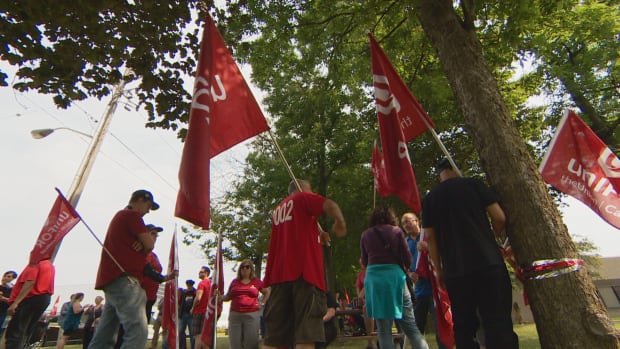 (Unifor members protested outside the Milton, Ont., Northstar Aerospace plant, which is scheduled to close within two months. (CBC))

Unifor may have received some attention, but it still faces an uphill battle for better pensions.

Northstar employees don’t have a defined benefit pension where employers promise a certain level of payout to retirees.

Instead, they have a target benefit pension plan where, if there’s a shortfall, the employer can choose to dole out reduced payments.

“We’re not talking about any flagrant disregard for the collective agreement or breach of the labour relations act,” says employment lawyer Muneeza Sheikh, with Levitt LLP in Toronto.

“What we have is a situation where Unifor is saying: what you’re doing from a public accountability standpoint, from a moral standpoint, is extremely disrespectful and a slap in the face.” 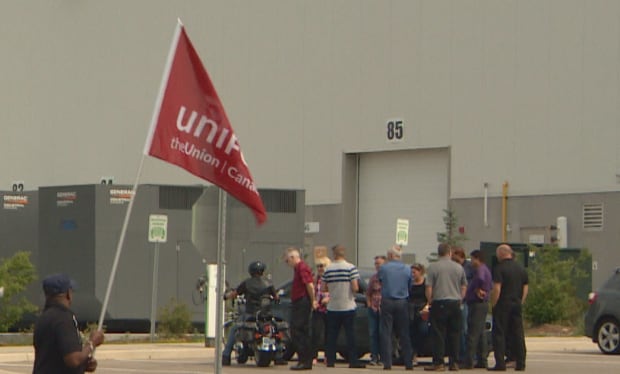 (Unifor members blocked entrances at the Northstar plant as part of their protest on Thursday. (CBC))

Northstar’s parent company, Heligear, claims it’s not responsible for any looming pension problems. The U.S. company says it made all the required payments, and that the plan was underfunded when it took over the Northstar plant in 2012.

“Any reduction or shortfall is a function of the plan management and design, which are not within Heligear’s control,” the company said in a statement.

Still, that’s little comfort for retirees like Ajmani, who believes he will get a reduced pension. “Pension is a promise,” he says.

It may be a promise, but sometimes, promises get to be broken. Sears Canada retirees also fear they may not get the pension they were promised.

As part of a court-supervised restructuring process, the cash-strapped retailer is closing 54 stores and laying off 2,900 workers without severance.

Sears Canada has also requested court permission to stop topping up the underfunded retiree pension plan, though the retailer recently agreed to postpone that matter until Sept. 30.

Many of Sears’ 16,000 retirees fear that if the company is allowed to stop making pension contributions, they will receive reduced pensions. Sears claims that may not necessarily be the case.

Recently laid-off employees who are collecting their pension in a lump-sum payout are facing another concern.

Sears Canada is only paying them 81 per cent of their pension value at this time; the remaining 19 per cent will be paid over five years, which is perfectly legal.

However, the missing money makes Kim Throop nervous. The former floor manager spent 24 years at the Sears store in Coburg, Ont., before it closed in March. She says she has already lost an estimated $16,000 in severance and now worries she may never see the rest of her defined benefit pension.

“There is some concern there, because you don’t know what’s going to happen in the next five years,” says Throop. “If Sears goes down, will we see that 19 per cent?” 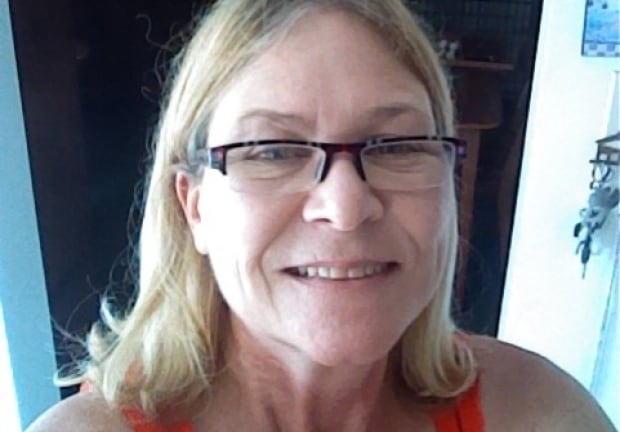 (Former Sears Canada employee Kim Throop fears she may never receive her full pension in the wake of the company’s restructuring. (Kim Throop))

Employment lawyer Chantel Goldsmith says if the restructuring doesn’t work and Sears goes bankrupt, chances are Throop won’t get the rest of her pension. Retirees would become unsecured creditors who would have to line up behind secured creditors, like banks, to try to recoup that 19 per cent.

“If the secured creditors take all the money in the pool and there’s nothing left for unsecured creditors, then, unfortunately, they’d be out of luck,” says Goldsmith, with Samfiru Tumarkin LLP in Toronto.

Of course, Sears may successfully restructure and Throop may eventually get her full pension.

But the situation is another reminder that sometimes there are no guarantees that the pension you are promised on paper is what you will actually wind up with in retirement.